A time of war … peace … and rebuilding 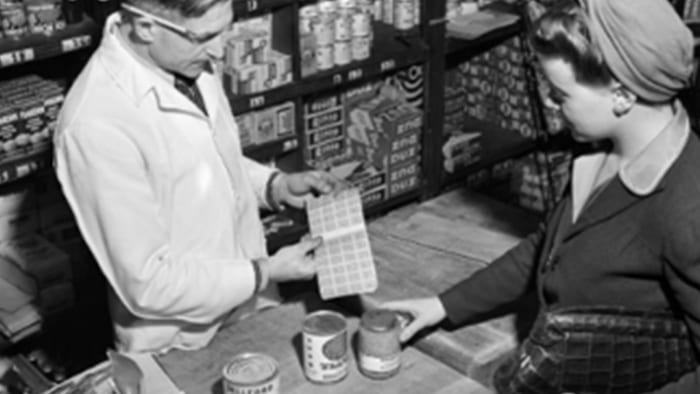 In 1941, the United States entered World War II, a four-year conflict that would bring dramatic changes for Wilbur-Ellis and the world.

In the U.S., many young men who worked for the company joined the armed forces, and a skeleton staff was maintained for the duration of the war at the company’s San Francisco, California, headquarters.

After the attack on Pearl Harbor in 1941, there were rumors of Japanese submarines off the Pacific Coast, which led to a sharp decline in fishing activity. This dried up supply, but inventories of fish meal the company held (accumulated during a falling market) suddenly became far more valuable. 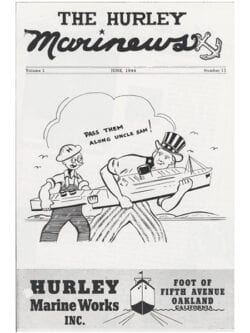 Soon, however, concerns about rising prices led to government price controls for many commodities, as resources were shifted to the war effort. Rationing of food and clothing began, in order to curb civilian consumption and limit shortages of essential goods.

Wilbur-Ellis did its part, fairly distributing the supplies it had. But believing the reins on prices had been pulled too tight, the company also went to Washington, D.C., to ask government leaders for reasonable profit levels. This effort was successful, and the company’s proactivity helped it weather the financial challenges throughout the war years.

Wilbur-Ellis also played a direct role in the war effort. Shortly after the U.S. entered the conflict, Wilbur-Ellis founder and CEO Brayton Wilbur Sr. bought a shipyard, the Hurley Marine Works, in Oakland, California. The shipyard made mid-sized cargo and specialty ships for the U.S. Navy, and repaired and refitted ships for the Allied forces.

This facility operated throughout the war, providing essential equipment and services. The day the war ended in 1945 – with its contribution to the Allied victory complete – the facility closed.

Connell Bros. – At the Center of the Storm

Although the war significantly affected Wilbur-Ellis employees and operations in the U.S., nowhere was the impact more dramatic than for Connell Bros. employees in Asia. Cities throughout Asia were occupied by the Japanese military and Connell offices closed.

In the Far East, almost all of Connell’s American staff and their families were put into internment camps. The acting manager of Connell’s Manila office and his family were interned for three and a half years. The Hong Kong manager and his family were interned for the four-year duration of the war. And the Singapore manager was held at a university that had been converted to an internment camp.

For these employees and their families, the company provided full pay and benefits throughout their ordeal, delivering the funds to their extended families in the U.S. While this helped ease the financial burden, Brayton Wilbur Jr., the son of the founder, acknowledged the lasting impact on those who were held. “Every man and their families survived the camps, but not without health impairment along the way.” 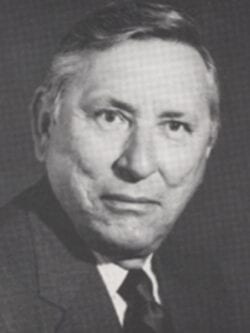 One long-time Connell employee, Herb Brown (left), spent the war years in Japanese prison camps in Japan and China. As his good friend Frank Brown (no relation) recalled recently, although Herb was a civilian, he was taken prisoner in Japan in 1941. “When Herb was taken prisoner, he weighed 160 pounds. When he was released in 1945, he weighed 87 pounds … he was one of the few that survived,” said Frank Brown, who led Connell and was Chairman of the Wilbur-Ellis Board of Directors during his 37-year career with the company.

Despite the extreme hardship Herb Brown experienced, after the war he joined Connell in 1954 and returned to Japan to lead the Connell office in Okinawa during the 1960s.

“There was some concern among company leaders as to whether Herb could be effective in Japan given his experience during the war,” Frank Brown recalled. “But he was terrific. He was very professional, and greatly admired by the local staff and everyone who worked with Herb. He also made the Connell business very profitable.” Herb Brown retired in 1984 after 30 years with the company, having completed several tours in Asia and a stint at the San Francisco headquarters. Frank Brown retired in 1999 and remained close friends with Herb in the years after their time with Wilbur-Ellis.

When the war came to an end in 1945, there was a flood of inquiries from former customers throughout Asia, hoping trading activities would soon resume.

Connell’s offices began to reopen, with Manila, Shanghai, Hong Kong and Singapore among the first. Notably, except for those still on active military duty, Connell leaders returned, in a show of loyalty and support. Likewise, the majority of Connell staff returned as well.

“It’s a reciprocal relationship. It reflects how the company treats employees and how employees treat the company. It’s a two-way street, and it explains why we have many employees with long tenures with Wilbur-Ellis. They come here and they stay because there is a sense of shared purpose.” — John Thacher

After the war ended, demand for goods skyrocketed in Asia, particularly in the Philippines, Japan and China. Connell resumed trading, primarily in the commodities it handled before the war. But soon Connell expanded to fill the need for machinery, construction materials, electrical equipment, agricultural equipment, and more.

Additional offices in Asia opened. An office in Bombay, India, opened in 1946 to provide chemicals and fertilizers in the region. Connell opened a New York office the same year to find new sources of goods to export and maintain closer relationships with customers. In Japan, representatives of Wilbur-Ellis had been in the country since 1947, and we were among the first foreign-based companies to reestablish trade with Japan after the war. The company opened an office there in 1950 – a presence that continues today.

During the post-war years, Connell would supply some of the leading American, and later German and Japanese, manufacturers with a wide range of products, including chemicals, pharmaceuticals, paint, industrial machinery, even zippers, as Hong Kong was a hub of clothing manufacturing.

In Central America, the company traded fish liver oils, fishery products, and vitamin oils. In the U.S., from fish oil and canned fish to a myriad of other trading activities on the West Coast, business was recovering. Trade in shark liver oil in the Northwest was very successful, with the oil being sold to companies like Upjohn as a vitamin supplement. 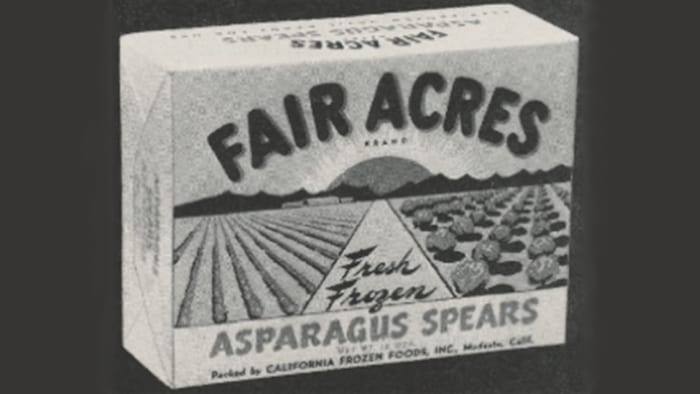 But fish meal dominated the company, with its use as a specialty fertilizer, as well as a valuable protein supplement for poultry and swine feeds. After the fish were depleted on the U.S. West Coast, Brayton Wilbur Sr. bought equipment from Cannery Row in the San Francisco Bay Area and shipped it to South Africa, Peru and Chile, supporting the fishing industries there. 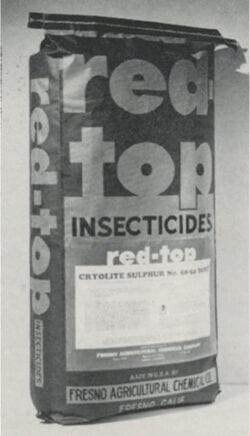 The fertilizer, insecticide and pesticide businesses in the U.S. also took off – setting the stage for the company’s expansion over the coming decades in agricultural inputs – Wilbur-Ellis’ largest business today. 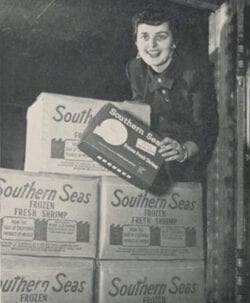 During the 1940s, Wilbur-Ellis opened crop protection and treatment locations for the ﬁrst time, starting in California and Arizona. This is when the company’s Fresno Agricultural Chemical Company came into being, manufacturing pesticides under the Red Top and Lighthouse brands, and the acquisition of the Arizona Agro-Phosphate Company opened the door to sales of phosphoric acid, which supports plant nutrition.

Wilbur-Ellis also entered the frozen and canned food markets, with the San Francisco office establishing a new frozen food department. Along with frozen fruits and vegetables sold under the “Fair Acres” brand, the division also traded in lobster tails from Australia, shrimp from Mexico, and frog legs from Japan.

The Beginning of a “Golden Age”

With business activity ramping up worldwide, the post-war era came to be known as “the golden age of capitalism.” Pent up consumer demand drove the economic boom in the U.S., where optimism was high, the winds of social change were blowing, and the “baby boom” generation was being born.

Globally, in the late ’40s and the coming decade, the U.S., Soviet Union, Western Europe and Eastern Asia saw the greatest growth. Even the countries hardest hit by the war were beginning to recover, thanks in part to the Marshall Plan, a U.S. government program established in 1948 to help rebuild Western European nations, remove trade barriers and modernize industry.

In summing up this extraordinary decade, historian Jennifer Rosenberg observed: “The 1940s tower over every other decade of the 20th century as the most full of sorrow, patriotism and, ultimately, hope.”

Stories of war, danger and drama

For millions of people around the world – including Wilbur-Ellis employees – World War II was a time of loss, hardship and disruption. Out of those troubled times, dramatic stories emerged. Here are two stories that have taken their place in Wilbur-Ellis history.

A story that has been told and retold involves B.A. “Ake” Hartman, the manager of Connell’s Shanghai office. When the city was occupied by Japanese forces at the beginning of World War II, Hartman knew he had to get out of the city – and he made a dramatic escape.

Disguised in local Chinese dress, and with the help of his friends in China, Hartman was smuggled through enemy territory – while being pursued by the occupying forces – and made his way to safety. After the war, Hartman returned to China and Connell Bros., while also assisting British military intelligence in the post-war years.

Another memorable story involves Connell manager Alanson Davis, who returned to Shanghai in 1945 as the war was winding down, entering the country with the first contingent of American troops.

When he went to the Connell office, what he found didn’t sit well. The office had been taken over by Japanese secret police, who had made it their home base for the several years. Indignant – and brandishing a .45 pistol – Davis evicted the unwelcome tenants, reclaiming the office for Connell.

In our next installment of Wilbur-Ellis Through the Decades, we’ll look at the 1950s, a time of post-war optimism, growth and hard choices.